You are here: Home / Products / UAVs

There are a wide range of UAVs on the market today, suitable for a wide variety of applications. Most UAVs can take off autonomously, fly a series of waypoints autonomously using the onboard GPS for navigation, and land autonomously. Applications include surveillance, search and rescue, and aerial photography.

Of particular interest to ADAM Technology's customers is the ability to acquire aerial images at very short notice in a short space of time at an incredibly low operating cost. In this respect, the UAV represents the aircraft equivalent of the digital camera revolution that has completely changed the face of photogrammetry in the last ten years — in the same way that digital cameras have massively reduced the turnaround time and cost of acquiring images and processing them, today's UAVs massively reduce the turnaround time and cost of acquiring aerial images.

For smaller projects, like volumes of stockpiles or waste dumps, rehabilitation mapping, or even pit mapping, using an autonomous UAV to carry a digital SLR can be by far the most cost-effective option (Figure 2). 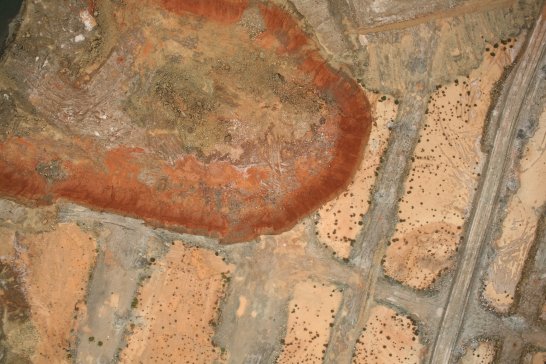 It is typical to be flying within 15 minutes of arriving at the site. Depending on the UAV and the configuration, flight times from 15 minutes to two hours are possible. 75 hectares can be photographed in about 15 minutes with a ground pixel size of under 4 cm and a height accuracy of under 4 cm, and with a modern PC the images captured can be processed in 3DM Analyst Mine Mapping Suite in under 15 minutes (Figure 3). 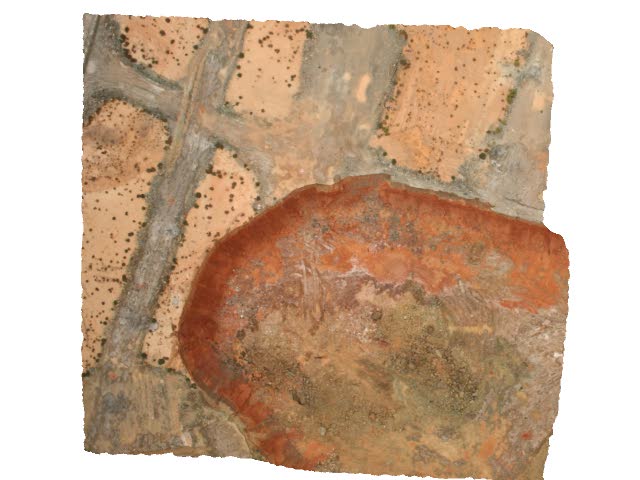 Get the Flash Player (or allow blocked content) to see the animation. 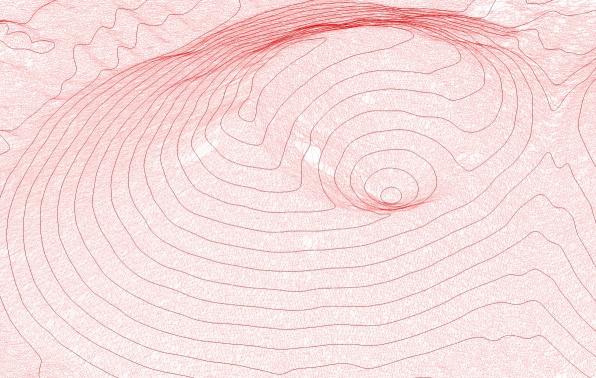 Figure 4. Triangulation and 1 m contours generated by 3DM Analyst of a stockpile.
The inverted cone at the top, not visible from the ground, is clearly defined.

One of the key applications for UAVs with 3DM Analyst Mine Mapping Suite is stockpile volume calculation.

Accurately capturing stockpiles from the ground is difficult and time-consuming, regardless of the technology employed. Taking photographs from directly above, however, has the following advantages:

A customer had a crushed ore stockpile pad containing several stockpiles covering an area of 330 m × 260 m. An SR20 equipped with a 12 megapixel Canon EOS 5D and a 24 mm lens was set up about 80 metres from the base of the pad and a flight plan consisting of four runs flying at 5 m/s at an altitude of 120 m, 70 m apart, and each 150 m long, was generated by ADAM Technology's UAV flight planning software.

Figure 5. Screenshot from 3DM CalibCam showing the flight path. Red, numbered points are the nine control points, surveyed with GPS, used to georeference
the project and check the accuracy of the results. Green points are relative-only points generated automatically by the software in order to determine the
relationship between the images. The camera icons show where the software determined the camera to be for each image that was captured. (The software did
not use information from the UAV about the position that each image was captured from because although the onboard GPS is accurate enough for positioning
the camera, it is not accurate enough for surveying stockpiles. If the accuracy requirement was not as high then the UAV's flight log could be used instead.)

The fieldwork took 30 minutes in total, including setting up the UAV, preparing the flight plan, running the flight plan through the UAV simulator to verify its correctness, going through the pre-flight checklist, conducting the flight, and packing up aftwards. (To repeat the process using exactly the same flight plan — to re-survey the stockpiles the following month, say — would take about 20 minutes.) Of that, it took about 6 minutes in the air to actually capture the photography. Figure 5 shows the camera locations determined by the software for each image; because the images were captured on a 5-second interval, the time required for each portion of the flight can be easily determined — about 1.5 minutes each to climb and descend, and about 3 minutes to actually fly the runs. This means it's possible to capture an area about four or five times as large (i.e. about 40 Ha) in a single 15-minute flight, and ADAM Technology has successfully captured larger areas flying at twice the speed (i.e. 10 m/s), further increasing the area that can be mapped per flight. If much larger areas need to be captured, ADAM recommends the SR30, which has an endurance of about 90 minutes. 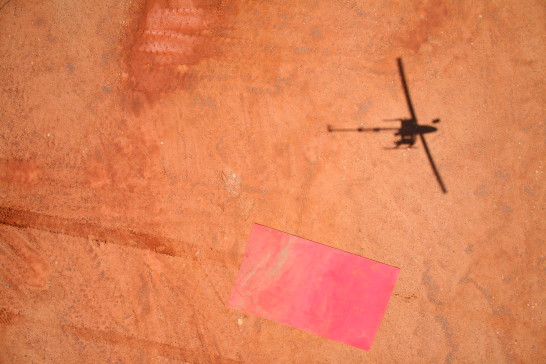 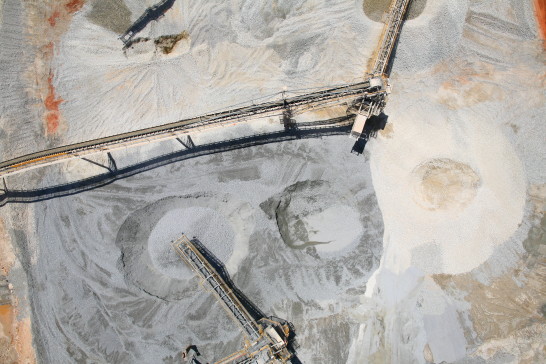 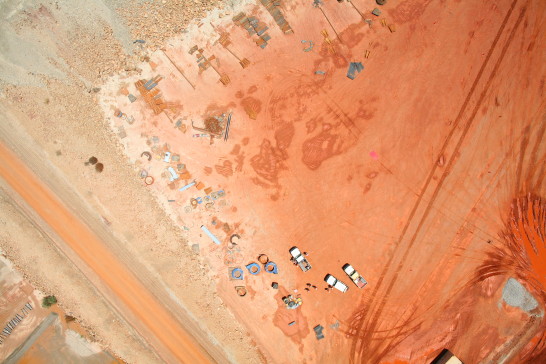 Figure 6. Some images captured during the flight: shortly after liftoff, showing the UAV's shadow;
the middle three cones; and the launch site (mid-right of the image) with Safety Pilot, Ground Controller,
and spectators. Click on an image to download the full resolution version actually captured by the camera.

It took 30 minutes to process the images and generate over 15 million points with an accuracy of 20 mm and a clear view of the entire stockpile surface (Figures 7–9). (If time is of the essence, it is actually possible to capture all stockpiles using just two images from each run (note the ground coverage of the image in Figure 6 above), which only takes a few minutes to process at the cost of some ability to see past the infrastructure (conveyor belts and stackers).)

Figure 8. The same point cloud viewed from the side. 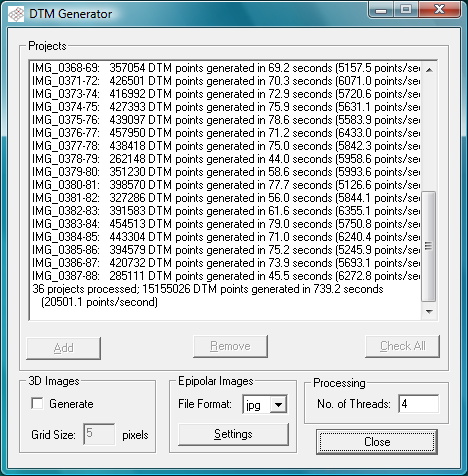 Figure 9. Generating the DTMs with DTM Generator. On a 3 GHz quad-core PC
DTM Generator was able to process four projects at a time, producing in excess of
20,000 points per second.

Note that the software picked up points on the infrastructure — in the images, this infrastructure actually obscured the stockpile below it, creating gaps on the ground, as would be expected. However, because the area obscured by the infrastructure was different for different images, it is possible to obtain a complete view of the surface by processing more images. (Note the complete coverage of the ground in the area surrounding the middle conveyor belt; the right-most conveyor belt shows a slight residual gap that could have been avoided by adjusting the position of the final run slightly.)

The remaining gaps in the data are where ore was actively being dropped onto the stockpiles during the flight — as the falling ore had obviously moved in the time that elapsed between images, it was impossible to match the points (simultaneous image capture is required for moving objects). If it was important, the solution would be to shut down the conveyor belts for a few minutes during the flight — still far less time than required if a laser scanner was to be used to scan the stockpiles from the conveyor belt gantries (the vibration would otherwise invalidate the scan), but probably not required due to the small area involved (and the fact that since ore is actively being added means that, at that level of detail, the volume is invalidated immediately afterwards anyway).

Using the 12 megapixel Canon EOS 5D, the final result was over 15,000,000 points, with an average density of 175 points/m2. 3DM Analyst includes the ability to resample this to a lower resolution if required (e.g. a 1 m × 1 m gridded DEM) so it can be exported into other software packages. 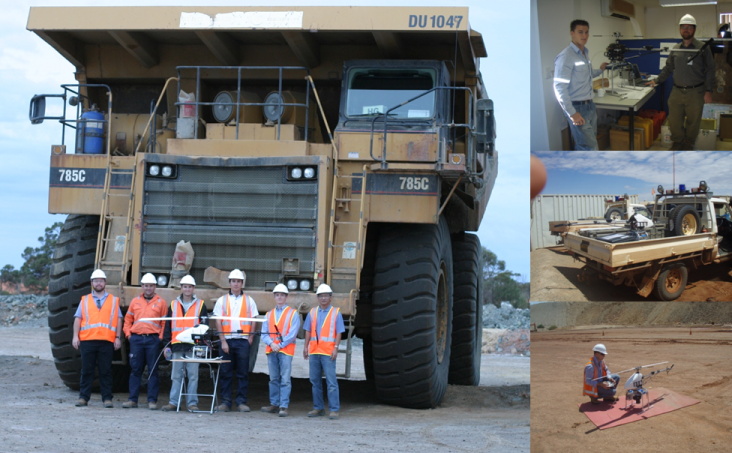 Contact us to learn more about these UAVs and to arrange an onsite demonstration!